I have been on Pitcairn for almost a week now and as it looks right now we leave somewhere late tomorrow or maybe the day after. There is no rush anyhow because we will go straight back to the French Polynesian islands so we better spend as much time possible here on Pitcairn, as there is just a very small chance I will probably visit this island again. That's the disadvantage of remote places I guess.

So, what did I do more on Pitcairn after the first 3 or 4 days?
On Friday nigth we went out for dinner and some beers at Steve Christian's Cafe and met him as well by the way. If you order a plate of fish, beef or sausage here, you will definately be sure of a good bottom in your stomach before heading to Pawl's house to play darts until very very late...or early, depending on how you interpretate things...;-)
Pawl is a big rough guy...well, that's how he looks, but inside he is just like most people here, a very friendly fellow who just wants to have some fun. And he sure makes his guests feel like home in his house aka bar. We did have some beers, but the absolute island famous highlight of a visit to Pawl is his way of hospitality: he offers you whisky. Ok, whisky....not from a glass though, but you have to drink it out of a spermwhales' tooth! Makes it just a little more special, and so is the hangover the other day. 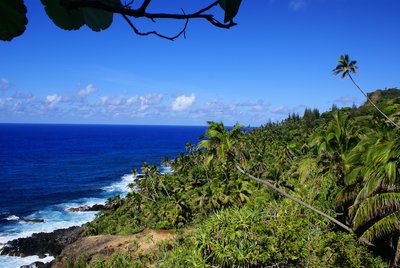 That's why I spend a lot of that following day sitting, staring and thinking while watching the view from my favorite spot along the Eco Trail. Although during the late afternoon the whole family where me and my cousin stay went up to the highest point (called Highest Point remember?) to have a BBQ and just sit, talk and relax a bit. The whole family is almost 20 people, so over a third of the population. It become a bit surrealistic if you realise you are having a picknick with almost half of a country's inhabitants. Oh, and yesterday was also a bit of a day where you finally here some more things about the recent past of Pitcairn. Just don't start it yourself, they will finally bring things up a bit, although it depends where you are staying and who you are talking with. Let's just say that there are different opinions and experiences from different people. Like anywhere else in the world. That's about all I can and want to say, because I won't mention people and (to me rather shocking, just google a bit) details. There has been enough said by others, and who am I to say or judge about anything at all. I can only thank many people here for having a great time. 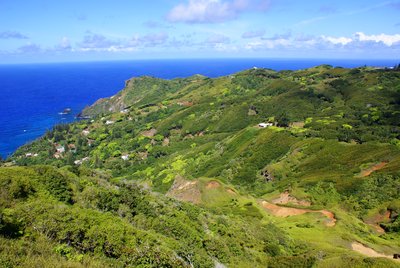 Today I will hike to the top of Pitcairn to sweat out some food and booze of the last day or so. I lost a few kilos on board, but gained more over here that's for sure. So I go by myself, pack some lunch and enjoy to be the only traveller here on Pitcairn, because the other are going to dive.....so boring..;-)
Oh, and let's not forget about tomorrow when a (relatively small, thank god) cruiseship is anchoring somewhere off the coast of Pitcairn. Either some people come ashore or we go on board....yeah! Living the real life over here! Looking forward to sell those luxurious travellers some stuff. We are also going to stock up on some alcohol and cigarettes for the way back, because we are running out of them rapidly now.
It's the last ship of the season which runs from September to March, when around 10 ships anchor here for a day (this one from 7 am until 3 pm like we heard on one of the general anouncements on channel 16 here). Only a few will be able to come ashore though. So, should I tell them I am a Pitcairner or a Dutchie?
Bye bye boys and girls, talk to you (much) later.

Previous Next Table of contents

Thanks a lot for your great story!

This blog requires you to be a logged in member of Travellerspoint to place comments.

If you aren't a member of Travellerspoint yet, you can join for free.